How I Became A Meditating Christian (2) 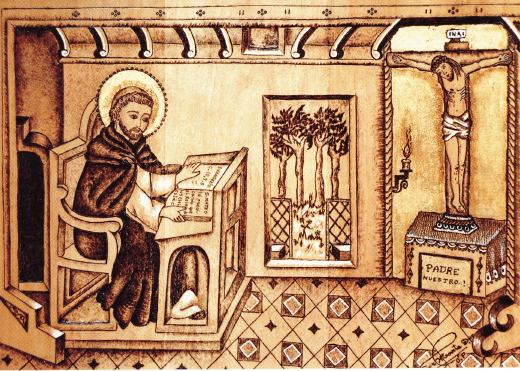 Let me pause from telling my own story for a moment, to provide some historical context for my journey to becoming a meditating Christian.
In 325 AD Rome collectivized Christianity into a hierarchical structure, paid for the structure with taxation, and made us the official religion of the Empire. We went from being a communal group of spiritual friends to an institutional religion. We went from the being the persecuted to the preferred; from the powerless to the powerful.
And as the truism goes; power corrupts. And it did.
We began to mix Roman aspirations with the will of God. In many ways became the religious support system for imperial aspirations. We came to see God was on the side of the powerful instead of our previous identification with the poor and powerless.

As this corrupting influence began to seep into our faith, almost immediately, a group of us recognized and rebelled against it. In the late 200’s and early 300’s, many of us moved to the desert to protest the corruption; building small towns and communities focused on returning to a simple, spiritual, communal way of following Jesus.
Core to their spiritual practice was the central devotional practice called “lectio divina.” It is a four-step devotional habit:
– read a sacred text,
– ponder it’s meaning,
– articulate prayer in response to the text,
– move beyond words into contemplative silence.
That last one, contemplative silence, is an almost exact duplicate of what many from the East call “meditation.” It comes complete with mantra, breathing, the whole thing.
Then, about the Fifth Century, monastic communities began to form all over Western Europe for the same purpose; to create a spiritual alternative to the institutional Church of Middle Ages. They followed the Rule of St. Benedict who laid out a way of being spiritual and being community. Essential to his rule for spiritual community was the daily practice of lectio divina; including contemplative silence; prayer beyond words. The monasteries often acted as centers of spirituality for those disillusioned with the institutional corruption in the church.

And this went on swimmingly for a long time… until about the year 1500.
When Western society went through the Enlightenment, the Church responded with an update to our faith to match, putting aside superstition and frowning on anything mysterious (because it smacked of superstition). The ancient Christian practice of meditation is nothing if not mysterious. Consequently, with the exception of a few cloistered holdouts, the contemplative Christian arts were lost after the Enlightenment.
Christians, like most Westerners began a love affair with Newtonian physics, a love affair with certitude, with reason, and with rationalism. Mystical activities like meditation didn’t really figure into this kind of quest for truth. Instead the focus became almost exclusively on study, cognition, thought, reading, Bible, doctrine, and dogma.
This was the non-meditating faith I inherited as a spiritually passionate teenager in the 1970’s.