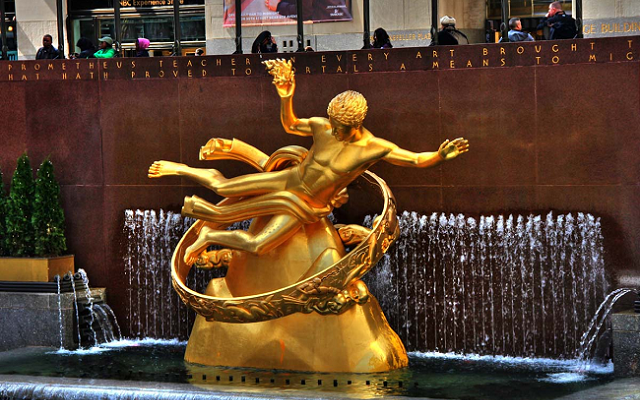 The bell tolls for each of us (first post). True. But most of us find the idea pretty distasteful and try to keep it out of our conscious awareness. People dying at home, for example, makes us too uncomfortable, so when we see death coming, we have professionals handle it for us. They keep it clinical, disconnected from our daily lives.
That’s how our culture handles Becker’s dilemma (last post).
However, the spiritual tradition is rich with encouragement to keep consciousness of our own deaths, not in the background of awareness, but right up front.
Twenty five hundred years ago, the Greeks pointed this out to us. Aeschylus, one of history’s most important playwrights, turned the myth of Prometheus into a morality tale about the foolhardiness of ignoring our own mortality.

The play goes something like this. Zeus wasn’t overly fond of human beings, and if he could have, would have exterminated them. However, that wasn’t a popular notion among the other gods, so he settled for making their lives miserable, in particular, denying them fire. But Prometheus, a superman character, rose to defend the mistreated, went to Mt. Olympus, and stole fire for them. For his efforts, he was severely punished. Zeus chained him to a rock for a few centuries and had an eagle stop by every afternoon to eat out his liver. In the night, his liver would heal up so he could start the process over the next day.
In the play, Aeschylus writes an interesting interaction between Prometheus and the Greek chorus. (Their role in the play was a mix between narrators and audience). The interaction went something like this:

Chorus: What have you done that is so bad that it warrants your torment?
Prometheus: I’ve been a good guy… really I have!
Chorus: Come on, there has to be some sin you’re not telling us about.
Prometheus: Well, I did give the mortals fire. And in the process, I disrupted their awareness of the day they would die. They no longer carry any foreknowledge of their inevitable deaths.
Chorus: What? You gave them a sense of immortality? What? A lost sense of their own doom? How did you do that?
Prometheus: Their ability to control fire gave them blind hope in their chests, hope that gets so big, it blinds them to their own mortality.
Chorus: Well, that’s not so bad, is it? It seems you helped the poor mortals.

Presumably Zeus had a counterpoint…

Oh contraire! You wish it was a good thing. But it is not!
.
OK, mortals — go ahead and depend on your fire, your technology, your knowledge of all kinds. Do it if you wish, but in the end, you’ll see. Like Prometheus, your efforts will eat out your guts. Yours will become a false dependence. You’ll put your trust in something that can’t support it. You’ll feel safe, secure, even immortal, but your feelings will betray you. You’ll set up lives in which you chase immortality, but you’ll be chasing the wind. Your efforts will lull you into depending on things you can’t depend on. In the end your false sense of immortality depends on things that cannot support you. And this will suck out your guts with worry and stress and anxiety.
.
So go ahead. Use your new found abilities. Gather up for yourself fire, or money, or industry, or technology. But in the getting, you will be lulled into a false sense of safety. You’ll forget that your demise is always right around the corner. In your illusion you will spend your lives like ants crawling the earth – chasing, chasing, chasing. However, all your chasing will do is destroy you.

This warning was issued 2500 years ago. Well see in the next post that Jesus and the Buddha said the same thing. After that, we’ll look at how one hammers out a healthy relationship with one’s own mortality.
Next time.